Scoutaholics and jamborees: an evening chat with João Armando Gonçalves

There’s a little bit of a flutter in the air as it’s not the usual group meeting, nor is it the friendly beer with a few scout friends. But it’s definitely a friendly scout meeting. We can tell, we have our scarfs on, but for the people behind the counter of the coffee shop we’ve booked, we’re just a curious bunch of individuals that are meeting there for some purpose.
Coffee, tea, lemonade, everyone takes their pick, chairs and tables are being moved around, as people from our scout centre as well as others, are still arriving. “Have you thought about what you’re going to ask?”, “Not really” was the conversation next to me.
Soon enough the special guest arrives.
I don’t recall the exact moment when “president of the world organisation” flew off somebody’s lips and where the number 40 million came from and became attached to the previous words. What I do remember was a pause in activity on behalf of the coffee shop’s personnel. It’s not the type of thing you see every day in your local bar. What they knew so far: a bunch of people wearing scarfs were meeting with a guy who’s the president of a world organisation made up of some 40 million people. Of course, you’re reading this and know quite a bit more than they did.
João agreed to meet with us and talk about rovers, since they hold a special place in is heart. He found good listeners and quite a few eager to ask questions. Would it be of any surprise for you to know that the first question asked was of howhe became chairman?
João laughed at the thought of such enthusiasm and shared his experience with us: coordinating Roverway, joining the European regional committee, being a member in the world committee and finally chairperson. But there's basically no single paved road to walk down.
Soon enough, a new question appeared: “One thing I experienced is that it’s hard to explain to potential employers here that scouting builds real experience. They’re not really familiar with it. What do you think could be done about that?” 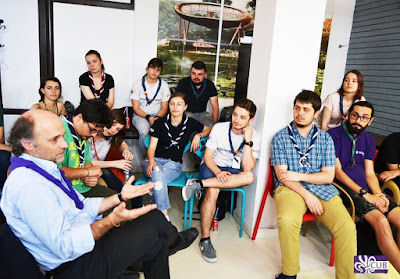 João listened attentively and continued: You see, we need to tell stories in a language that people understand, adapt your scouting experience to normal language. We can’t just expect people to be familiar with the words we use inside the organisation.
A sound of agreement fell over the room. But how could we attract more rovers? Some people seem to think scouting is just for children.
If you want to convince the public opinion, you have to communicate. Instead of showing just cubs, try showing young people having fun. You need to show that young people have a place here. The community needs to understand that it’s not just for young children; your local groups should show more young people. It’s a slow process, but you have a good advantage, you have a lot of young leadership.
Later on, somebody brought up the topic friends of scouting – what should we do to bring them close? To this we were advised to invite them to events. “It depends what type of event you want to have but keep in touch with them, because usually those who have been scouts want to keep in touch. Show small appreciation. In my country, we send e-mails at the end of the year and things like that. Some countries have their own associations for former scouts. If you have a person with a public profile you can show that this person was a scout and what scouting meant to them”.


What do you think is the role a rover leader should play?-somebody asks.
Well, they have a different role than with other age groups. In rovers, the leader is more of a facilitator. He’s like the referee in the football game, the players need to acknowledge that he is there, but he’s not the main person. He has the contacts, the experience and he can help if they become stuck.
One of the more experienced scouts in the room stood up and spoke: Some of the people here have never been to a jamboree; can you tell us more about jamborees, from your experience?
It’s basically a big and exciting party. In scouting we sortof collect memories and experiences. This happens on a local level in patrols, but also in jamborees. A jam can’t be same old, same old. You get to meet people from various places,see how they do things. If you think of it, for us, to meet somebody from other cities, it’s not such a big deal, but for an 11 year old it’s really exciting. It can mean discovering new activities and ideas. And it’s wonderful that you plan to have international guests as well at your jamboree, because it really lets you see the world from a new perspective. I always say that a jamboree is an important opportunity not just to go to the person but also to improve and empower yourself as an organisation. But it’s also a lot of work. You know, Radu (Stinghe) was saying at the end of the last jamboree “Never again, hit me on the head if I ever want to do this again. Now he’s doing it again. I think he forgot, but it’s that way with these events”.
What was your first jamboree experience?
Oh, my first jam was many years ago, back in my country and it brought together about 8000 scouts. My first international one was the World Jamboree of 95’ in Netherlands. After you experience an international jam, you just want more and more.
What do you think would be necessary to organise a Roverway in Romania? – somebody asks. A wide smile appears on João’s face. Indeed, this is a room filled with some big dreams, eager to get up and find their place in the world. Doing a good job with the Romanian Jamboree of 2017 would be a good first step, he advises, and then little by little we will learn all we need to take up such a task. “What you need is to change the point of view. When you go to international activities, it’s more complicated. For example, you can’t just do the activities you want and like, or you have to consider food for vegetarians and various religions”.
On a different note, somebody steps in and asks: most of us leave from small towns and there are no leaders left there. Can you give us any advice on this? 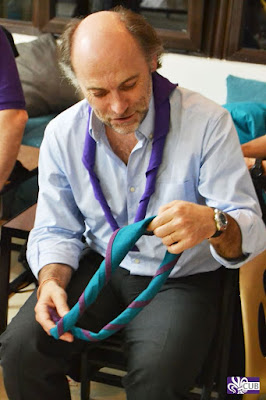 This happens everywhere, my country too. If you can attract the adults that live there in the town, that’s the best choice. You have to be careful, because scouting’s purpose is not to make leaders. I know there’s this culture where you’re in a local centre and you don’t leave because we just don’t do it that way, but if you really believe in the mission of scouting that shouldn’t matter.
And if you think about it, you don’t need to be there in order to be your centre’s success, you’re already a success by being here, Radu Stinghe added to the conversation.
But what would somebody need to do to become president of the world organisation? João bursts into laughter. What can you say, we definitely aim high.
“Well, I can’t say do this or that, there’s no one way. How about being an advisor? They’re the ones who prepare all sorts of policies. There is a team of your advisors, all elected in their positions by a meeting of young representatives. They propose resolutions. I don’t see why somebody from Romania couldn’t run for this. And we have some youth advisors who run for the world committee. So if you really want to be chairman, this could be a way to start. But you have to be young-ish: 18 to 26.”But to sum it up, his advice would be to be as implicated as possible in international activities and with the national organisation.
Do you have any advice for working with rovers, considering that at this age most of us attend university and/or work?
Projects need to be planned ahead of time, have periods when you focus on scouting and periods when you’re more relaxed. That’s the best you can do. But if you feel it’s too much, or scouting doesn’t help you anymore it’s perfectly normal to stop and find something new. In the end, scouting is what you want it to be.
A girl cuts in the silence left by the previous statement: I’m taking a break from scouting for the moment.
“I tried quitting” somebody else adds “it didn’t work. My name is Vlad and I’m a scoutaholic”. The room bursts into a laughter of agreement.
The issue with Romanians is that they have lots of passion. But the fact that you can stay away gives perspective. In France for example they have to stay away from scouting for some time, a few months maybe, to grow perspective. This can benefit your actions as a scout leader.
A few nod, taking in the idea while others shake their heads a bit more vigorously in approval. Looking around, we’re the last customers. The espresso machine has been silenced, the glasses and cups are drippingdry, the pillows have been fluffed and put back into their rightful places, and all is set for closing; all but a handful of eager scouts, puzzling away wondering if there is anything they might still need to ask that might be answered by the chairman of WOSM.
“Why do you wear that purple scarf” asked a voice from the back of the room. “Can’t you wear your favourite?”
Well, no I can’t. This scarf represents the World Organisation, and all members of the committee have to wear it.  On cue, our youngest honorary member steps in to offer him the scarf of our group. One can only wonder how many such a person must own. To everybody’s delight, João puts on the scarf and soon enough an eager photographer shouts for group photos. 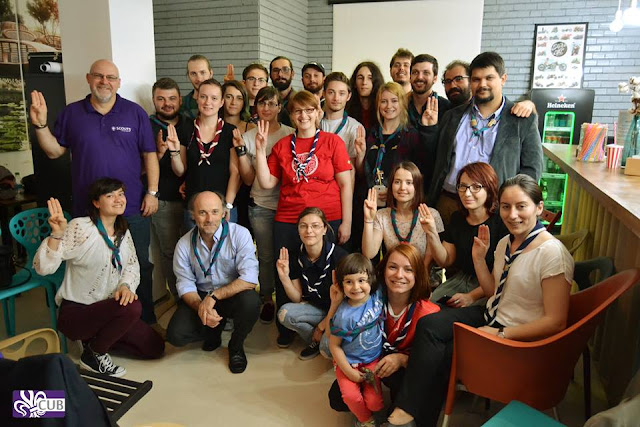 Photos are taken, thank yous and goodbyes are said. Soon groups and groups of young people wearing scarfs walk their ways into the night. It was a fine Monday evening.